Since early 2017, Rotor asbl-vzw and RotorDC are based in Anderlecht, in a former chocolate-factory owned by Citydev (a large Brussels public building owner). Since then, we have developed our activities and managed this site under a tenancy-at-will agreement.
This is the story of our relationship with this place.

What do we do here?

Most of the space is occupied by Rotor DC’s activities. 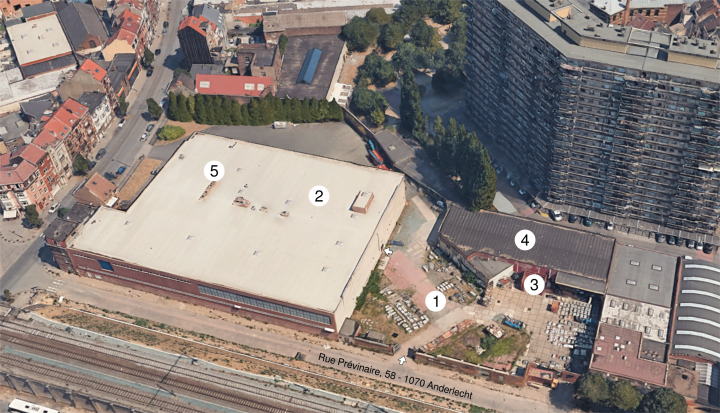 This is where we store most materials which support weathering (mostly stones). We organise the space between storage, loading and unloading, bikes and cars parking and ...ever growing vegetation! 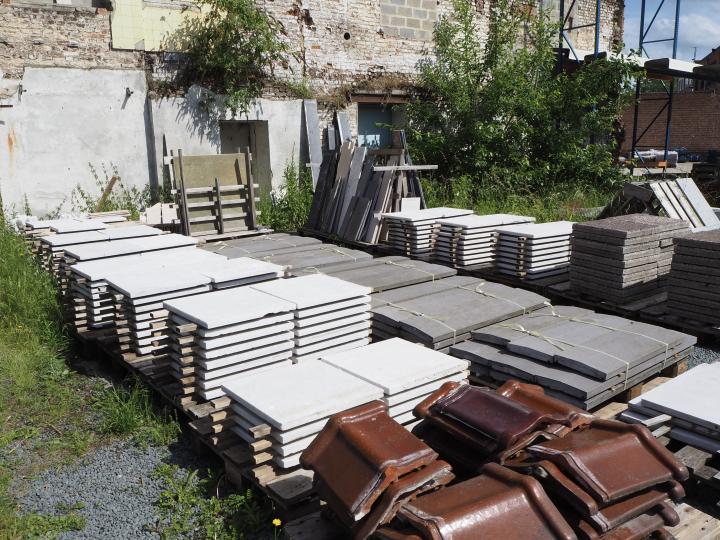 This is the public face of Rotor DC. It is open to private as well as professionals clients.

Clients are free to wander in the showroom as in any other hardware store. All prices are displayed on tags. A system of barcodes helps us to keep a real time and accurate view on our stock. This system is coupled with an online shop.

After the first very cold winter spent in Leonidas, we built a temporary winter box for our staff. This is where we welcome our clients. There, we also have a small photo studio to document the materials and a workshop where we rewire all electrical appliances to meet contemporary standards. 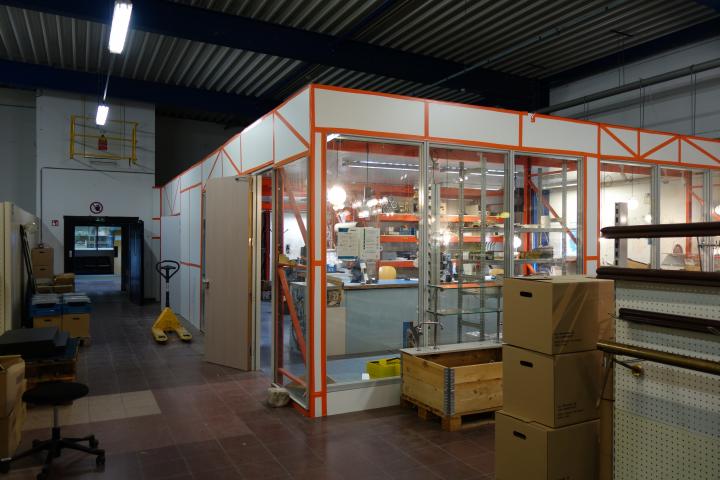 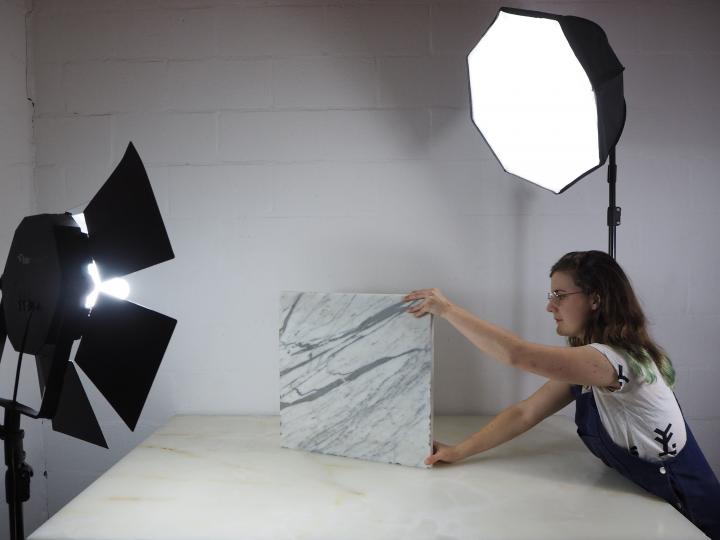 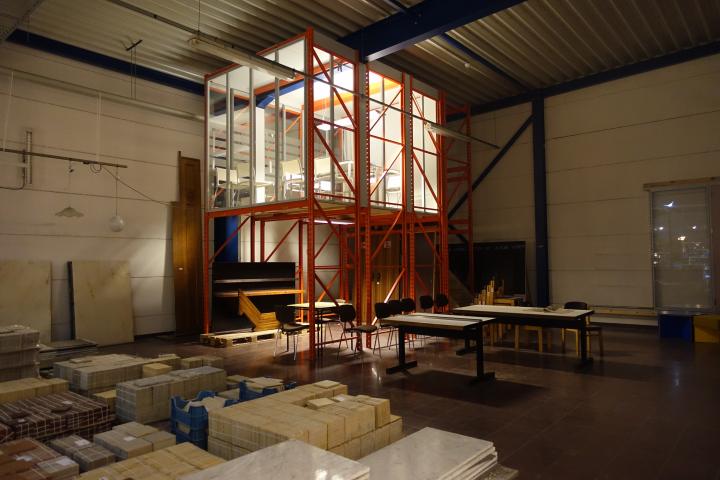 A building component that has just been dismantled is rarely ready for reuse. Most of the time, it requires a few additional operations such as cleaning, sorting, classifying, documenting…

These operations are often labour intensive. For some materials, it is the additional cost of these steps that prevent them from competing with cheap new products. Yet, to a certain extent, it is possible to enhance the efficiency of the reclamation steps by mechanising and systematising the processes.

However, because batches of reclaimed materials are often unique and present many variations, a good deal of the operations are still done by hand. 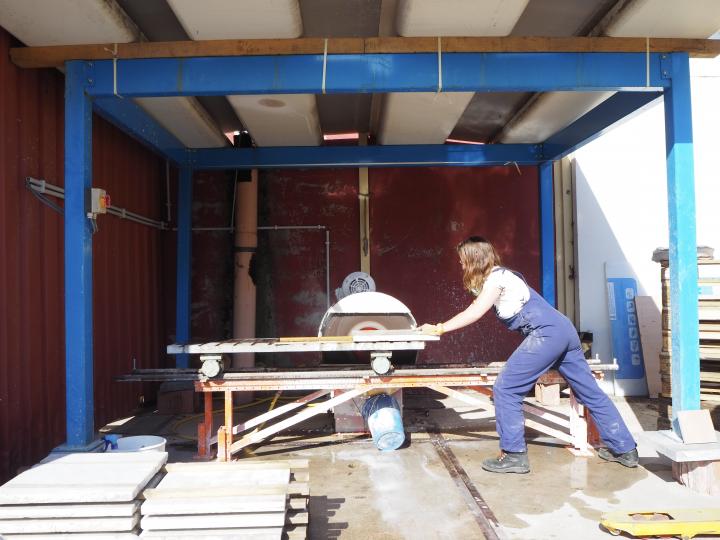 What can not be stored outside is being kept here. This is also where all incoming materials (coming either from our own dismantling sites or arriving via our consignment scheme), are inventoried.

Because space is scarce, we make our best to reach high turnovers. Most of the materials spend less than a few weeks in the warehouse before finding new uses. However, building construction is a long and slow  process and materials are often chosen months before they are actually put to use. We therefore provide our customers with a storage service for materials they have ordered and will install later. 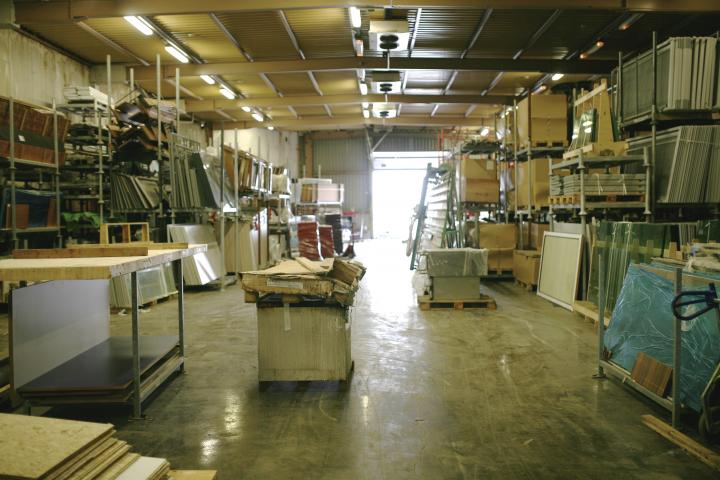 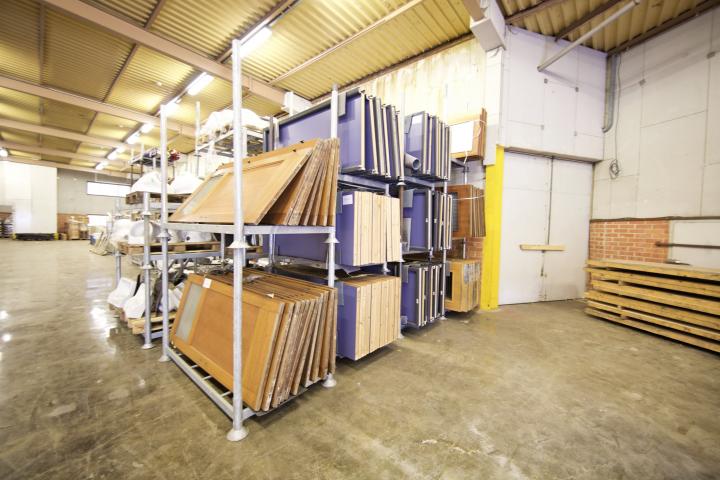 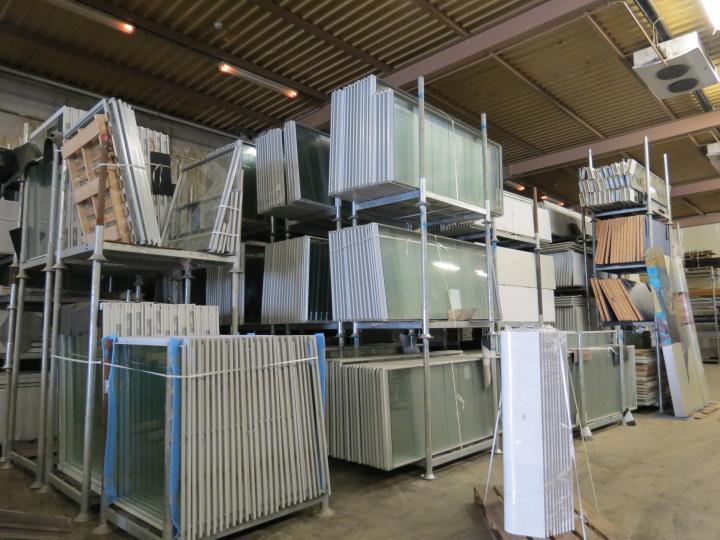 Back to the first floor of the main building, behind the showroom and winterbox, are Rotor’s asbl-vzw offices. We built the interior finishings in successive phases, using 99% of reclaimed materials coming from Brussels: suspended ceilings, partition walls, kitchen equipment, furniture... 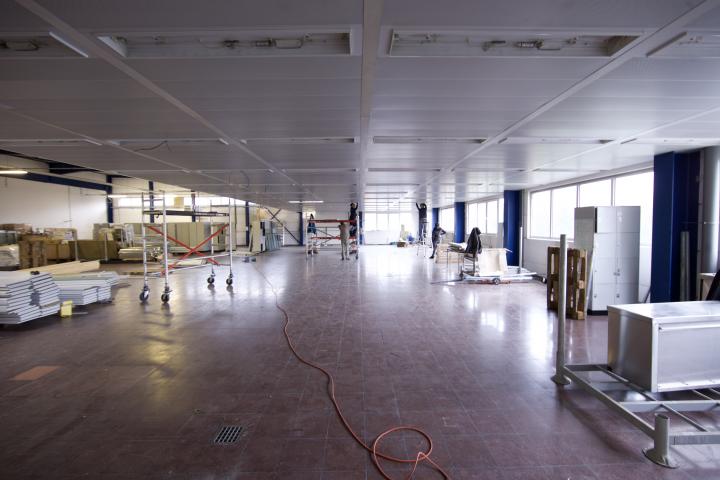 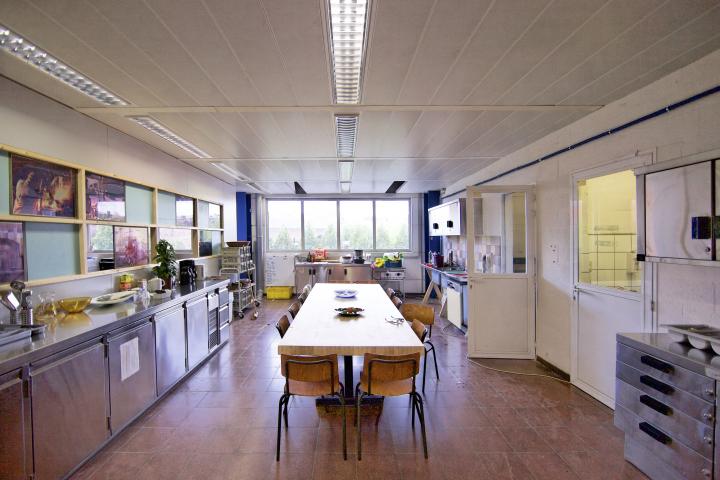 How did we get there?

In 2014, we launched our first dismantling operations with the purpose of selling reclaimed materials for reuse. At that time, we had just finished a major update of Opalis during which we visited many reclamation and salvage stockholders in Belgium. We then felt ready to venture into the practical aspects of the salvage trade ourselves.

Although we started by trading materials from site to site, we soon realised the importance of having a place to store materials. Sometimes, storing a batch of materials for only a few days can make a major difference in finding an actual demand. Not to speak about all the operations of sorting, cleaning, packaging… which are often impossible to conduct on site because of short timings and limited space.

From 2014 to 2016, we installed our activities in a former warehouse in Vilvoorde, just 500 m behind the administrative border of the Brussels-Capital Region. There, we could store batches of materials in relatively good conditions. We also developed a small showroom where we could welcome customers.

This is where the project Rotor Deconstruction gradually gained in importance until it became autonomous. By the end of 2016, we incorporated Rotor DC as an autonomous cooperative company.

This situation was not ideal, though.

Our headquarters were still in the city centre (Rue de Laeken) and managing two sites was complicated. We spent an awful lot of time commuting between both places and missed the opportunity of having our teams working together. Plus, the rental agreement in Vilvoorde was short termed - the owner had other projects for this parcel.

Early 2017, we were in discussion with CityDev, a public service institution whose activity consists of developing urban sites in Brussels. At that moment, they presented us this former Leonidas chocolate factory which they had just bought and had been standing empty for 4 years.

It met our needs.

In less than two months time, we moved all the content of the Vilvoorde warehouse and showroom to Anderlecht. The move of all our stuff required 25 semi-trailer trucks. Soon after, we installed  the offices. Since then, we have continuously improved our installations and took good care of this quite unique site.

Where are we exactly?

We are situated in Brussels, Rue Prévinairestraat 58 (Anderlecht). 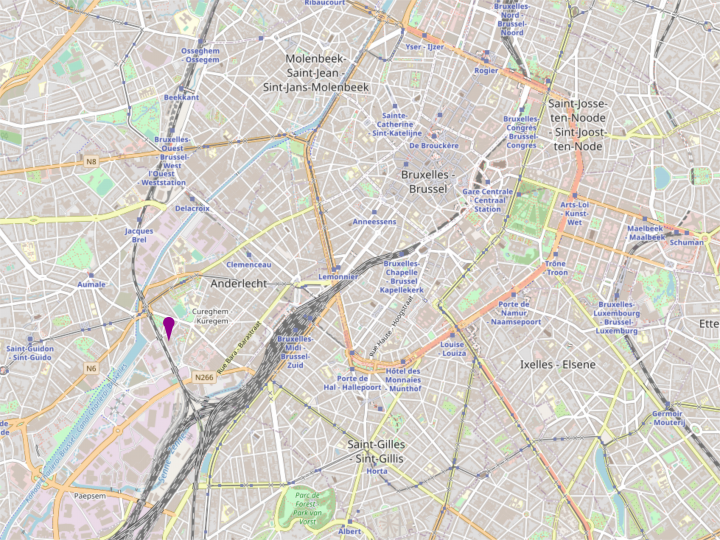 This place is conveniently situated at a 15 min walking distance from the Brussels South station. It is on the exact border between two contrasted worlds.

Cureghem used to be a small hamlet on the rural outskirts of Brussels.

Actually, the name of our street comes from Mr. Prévinaire, the owner of one of the first factory established in this area around the 1840s: 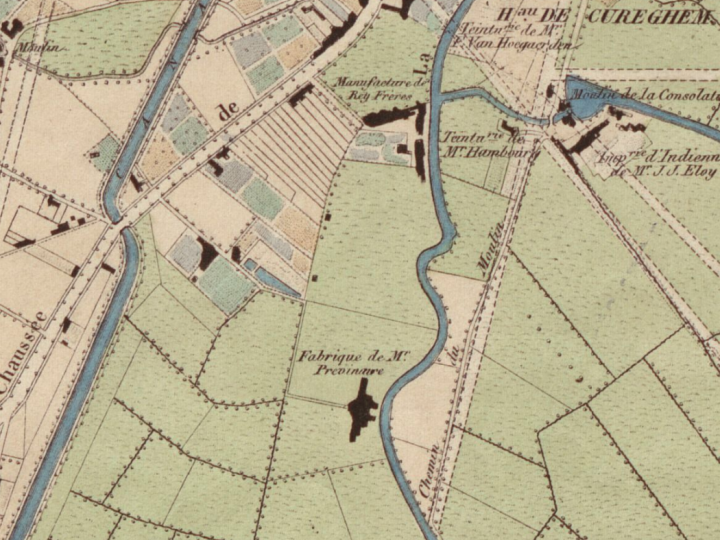 From then on, industrialisation took over.

The presence of both the canal and the Senne river made it an interesting place for developing industry. In the early 19th century, the site on which we are located was used by a large silk printing industry.

A few decades later, in the 1870, many more manufactures had been established in this area. They produced oils, candles or chemical components: 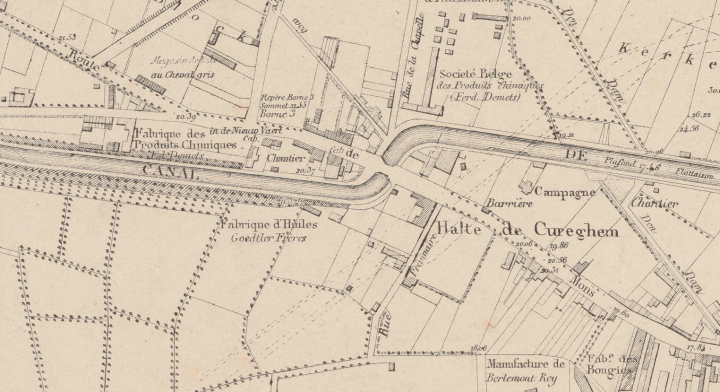 At that time, the railway was still to be installed although the station Cureghem was already there.

Industry only intensified to the 20th century. Cureghem and the whole Canal area hosted many large factories, as shown by this 1910 map: 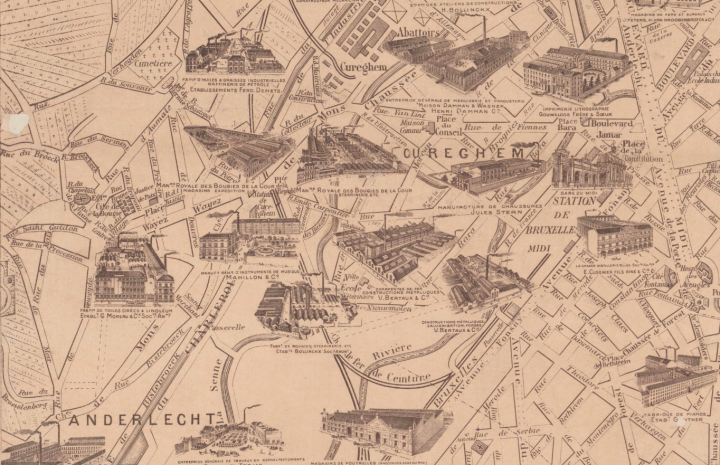 Heavy industry left Brussels from the 1960s on although the Canal and its surrounding areas remained largely used for diverse economical activities.
This is currently changing, though.

The Canal area has become a major redevelopment axis for Brussels, focussing the efforts of public authorities, urbanists and architects. Many former industrial sites are being transformed into a mix of new economical activities and housing.

In the short term, the parcel on which we are situated will become a large housing development and we will be forced to find another place for our activities. We don’t know yet where we are going to go. Increasing real estate pressure in Brussels makes it difficult for large activities such as ours to find their place in the urban fabrics. If temporary leases are becoming increasingly popular, they don’t offer any long-term solution.Yet, we believe that our activities have their place in a city like Brussels and in urban contexts in general. We are thus working on different scenarios.

We are not the only tenants of this site. We are happy to share the facilities with other organisations, with whom we have developed synergies. For instance, we have taken advantage of the presence of a joinery workshop to process some batches of parquet. There are also indoor football facilities, other contractors, etc.