The building block between rue de Pont Neuf, rue du Cirque and rue de Laeken has a remarkable place in the history of Brussels postmodernism. In the late 1980s, after a decade of conterprojects and contestation by figures such as Leon Krier, postmodern architecture began to be institutionalised. At that time, AG Group became an engaged proponent of what was back then regarded as an alternative approach to architecture and urbanism.

In the early 1990s, the building block in question was redeveloped by the AG Group. For the side of Rue de Laeken, an international architecture competition was organised for the construction of seven different “maisons de ville”, in an effort to regenerate the traditional urban fabric (on a plot that had been leveled 25 years earlier to be used as a parking lot). Across the block, “La tour bleue”, a modernist eleven storey glass tower from the 1960s was granted the privilege to be the “first tower demolished in Brussels”. It had to make way for its successor, a six storey office building in something that could be described as neo-Haussmannian style: a deeply serious architecture, using the formal language of classical architecture, symmetry, decorative columns and arches.

End of the flashback. In 2018, AG real estate wished to transform the ground floor of this office building in a learning and congress center, which would showcase a fresh image of the company. The ideological framework of the new project differs in many aspects of the one of 30 years earlier; natural light, relation inside/outside, sustainability and “‘new ways of working” were the keywords used in the design brief. evr-architecten was chosen for this design assignment and invited Rotor to advise on the materiality.

We made a detailed audit of the reusable elements, together with a survey of what we perceived as the qualities of the existing interiors. We were struck by the robustness of the materials used, and the excellent state of maintenance of the premises. Granite cladding and flooring, ornamented doors, veneered panelling… it felt as everything has been designed to last for centuries. But it’s exactly this rigidity and heaviness that is seen as problematic by the client today.

Throughout work sessions between evr-architecten and Rotor, different design proposals were tested. The working assumption was that a cut-and-paste approach to materials could be a way to reconcile the paradoxical heritage of the 1990s and the expectations of the new project. This resulted in a number of design choices consisting in preserving some parts of the existing interiors, while transforming others, as well as in the use of reclaimed materials for a number of applications.

During the works, RotorDC realized the careful dismantling of granite slabs and wood panelling intended to be reinstalled in the project. The panelling (around 150m2) was reused as such, concentrated in one of the wings of the building, to clad the walls of the meeting rooms. The granite was reused for the central bar in the project's central open space. Furthermore, RotorDC supplied 300m2 of reclaimed and cleaned ceramic floor tiles for the sanitary spaces and the kitchen.

Additionaly, over 1000m2 of cobble stones and other landscaping elements where reused in situ at the buildings courtyard, and over 2000m2 of raised floor tiles where reclaimed and reused over the entire floor area.

Traces of the existing building remain visible in plan (an unfolding partition wall remaining in place) and along the edges of the project, like an elevator lobby or a passageway that haven't been touched. The window frames and associated woodwork like radiator covers have been preserved as well, by simply replacing the glass in the frames.

The result of these efforts is that the new project, while still absolutely succeeding in transforming the ground floor from a maze of small office spaces into a open and light campus for AG, is a layered one. The old project remains visible in the new. A carefully drawn plan and the reuse of materials connect to the history of the site, rather than replacing it. 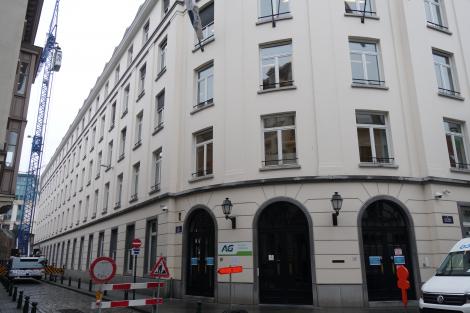 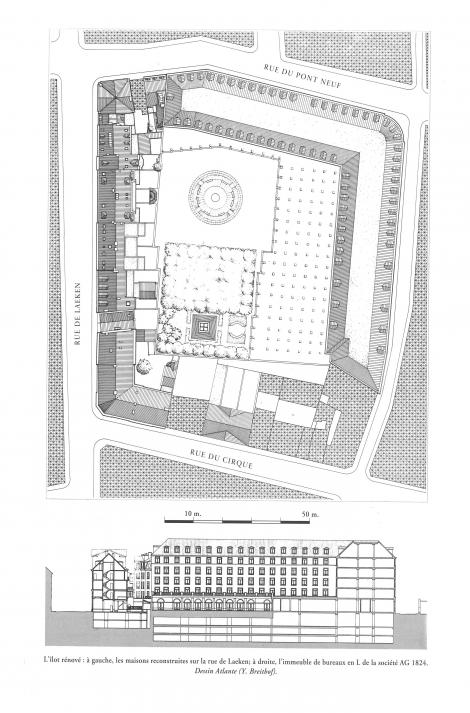 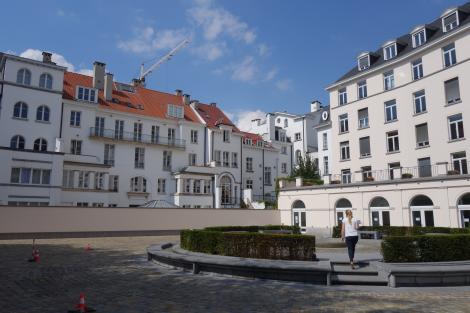 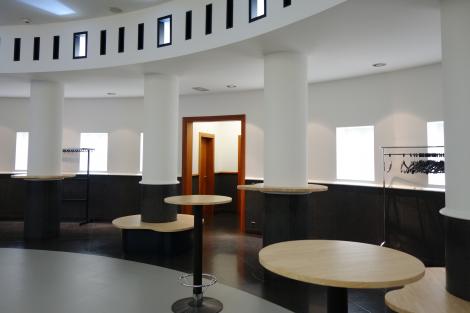 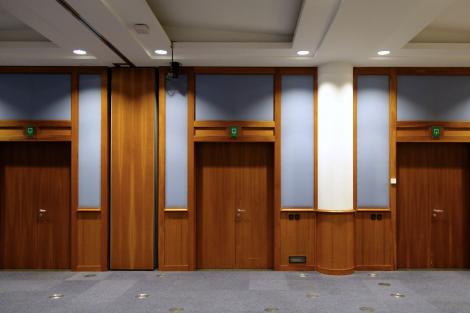 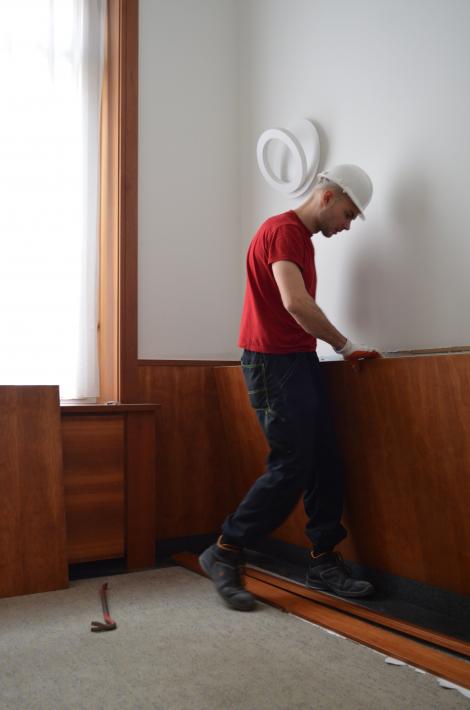 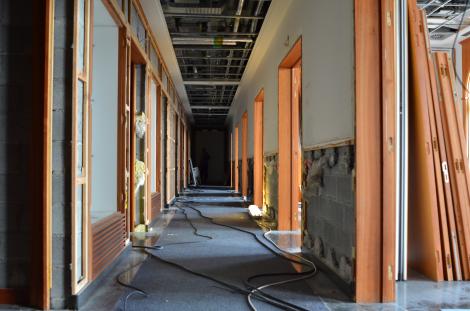 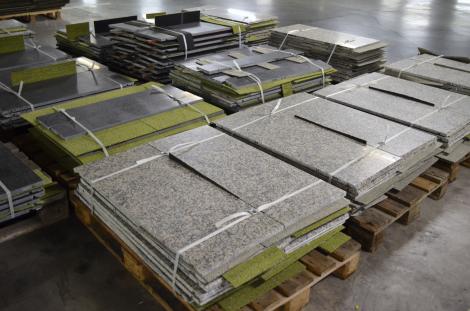 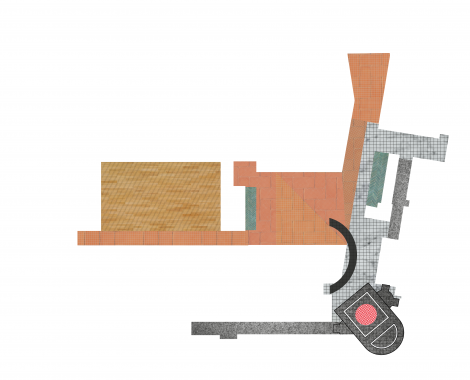 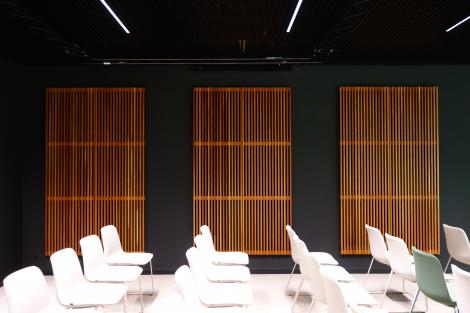 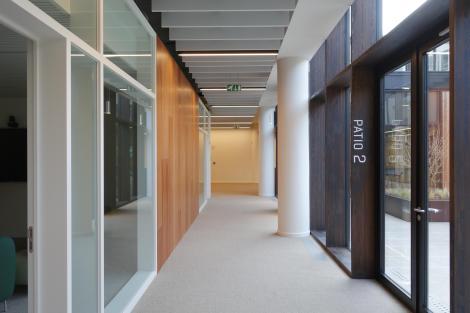 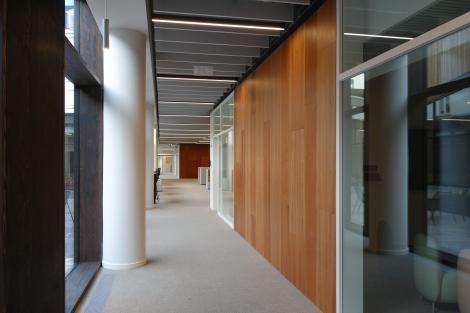 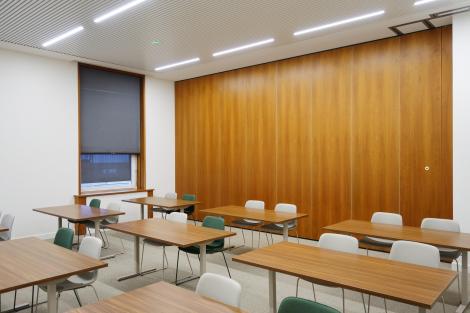 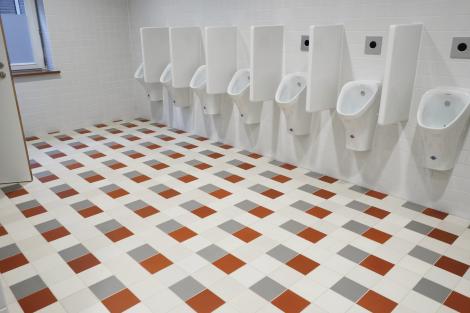 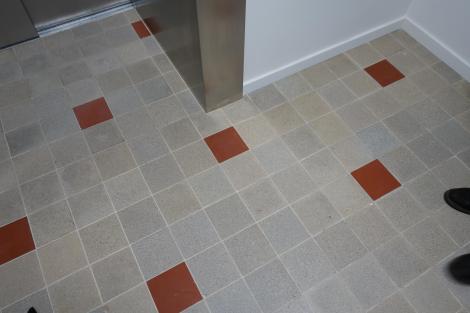 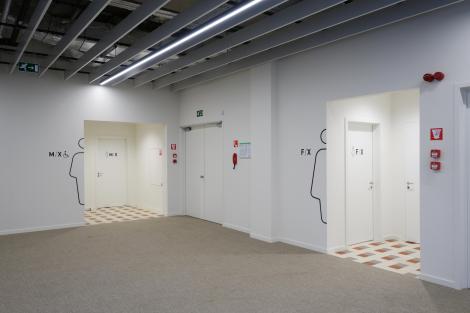 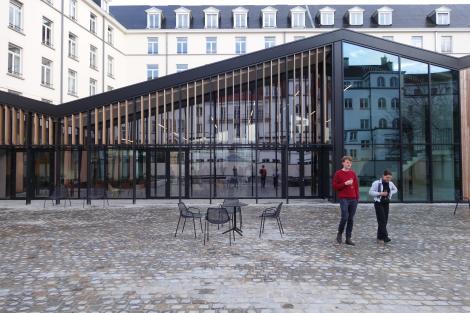 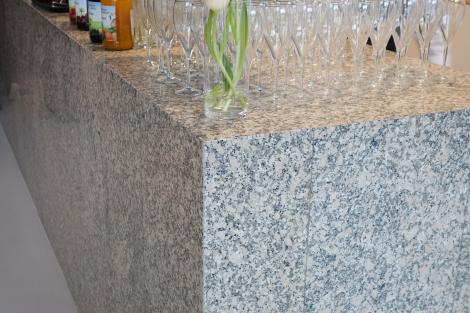 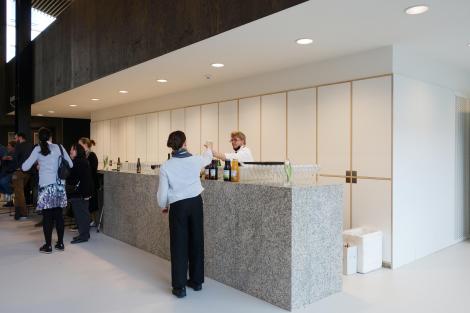 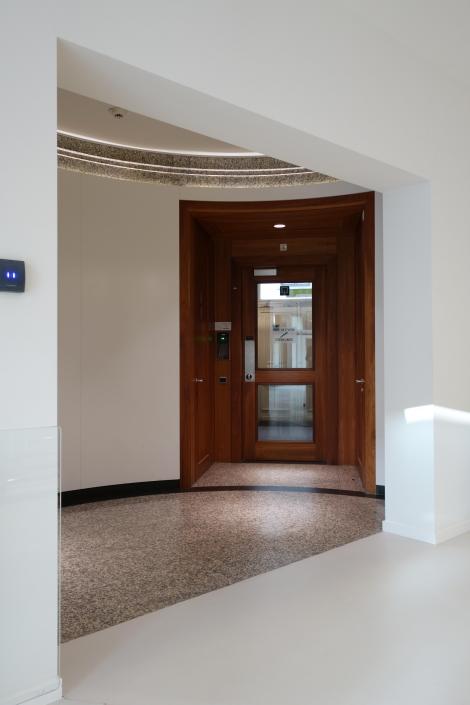