In 2017, the non profit organisation Les Auberges de Jeunesse acquired a new place in the centre of Brussels, at the Place des Martyrs. The ground floor of one of the square’s typical neoclassicist buildings was to house their headquarter offices for about 20 people. It had previously been a cultural place for kids, with some facilities (like benches, cosy corners, etc.) precisely on their size, designed by the Belgian architect Marie-José Van Hee, in the nineties. This meant that there were two layers already in place. On the one hand the existing, neoclassicist structure and facade, on the other the arrangement of the interior as a cultural centre.

First we tried to preserve as much of the interior elements already provided by Marie-José Van Hee. The kitchen was still functional, the linoleum on the floor didn’t need to be changed. As much of the relatively dark wall coverings (which make sense in a small performance venue, but not to the same extent in offices) as possible remained untreated. And the fixed wooden furniture was only punctually altered, to give it another form or to transform it in comfortable seating.

Second, we paid a lot of attention to the negotiation between the existing structure and the reclaimed elements, that we used to divide the interior and make it functional as an office. Puntual lighting was installed. The partition walls were placed against the concrete structural beams, instead of underneath. The acoustical hexagons and the lighting fixtures overlap on the ceiling. And the communal tables were made out of glulam and placed on sliding feet, so that they could easily be rearranged all over the linoleum surface.

The installation of the reclaimed partition walls was paired with cork. Very easy to cut, very light to install and very tolerant to surface irregularities, the cork was used to fill up the gaps between the reclaimed materials and the existing space, and is an additional thread running through the interior. 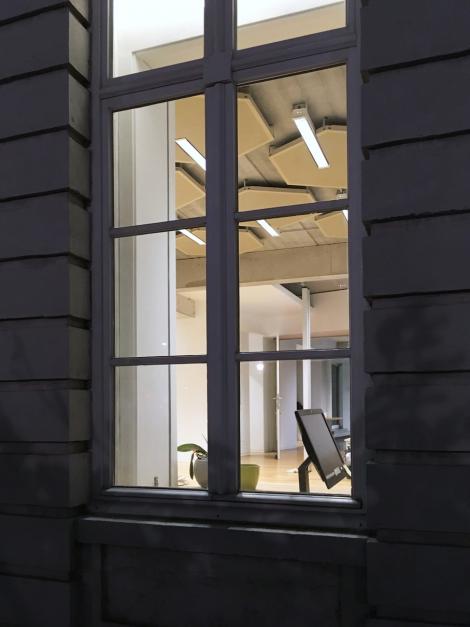 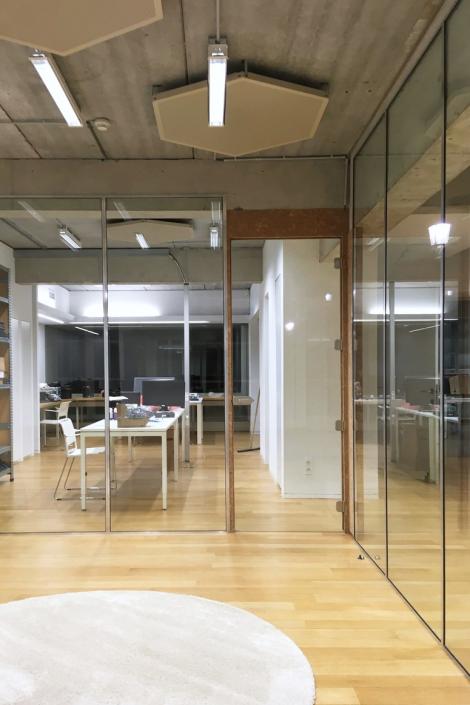 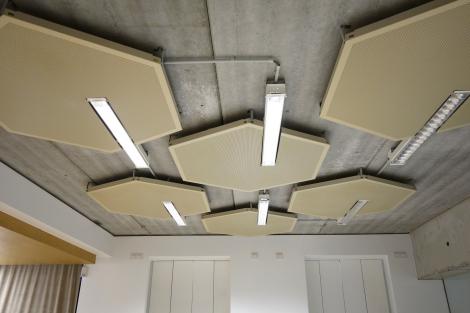 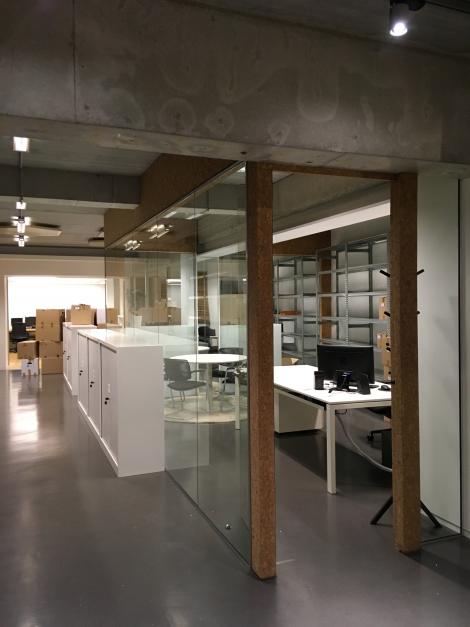 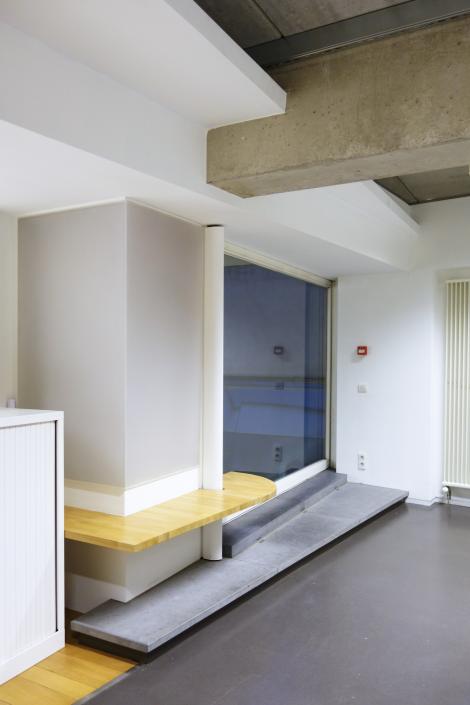 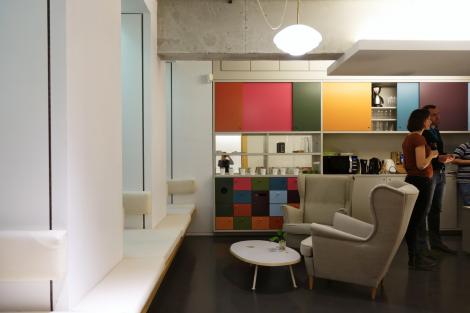 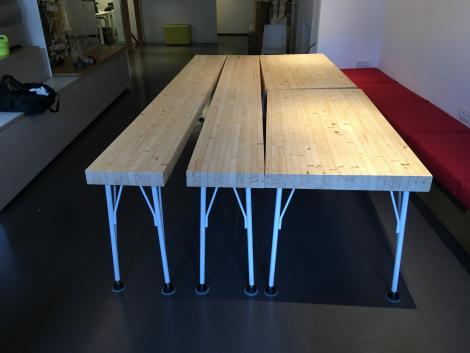 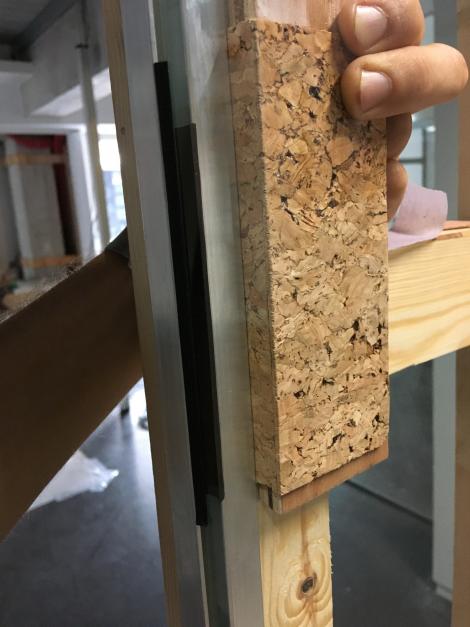 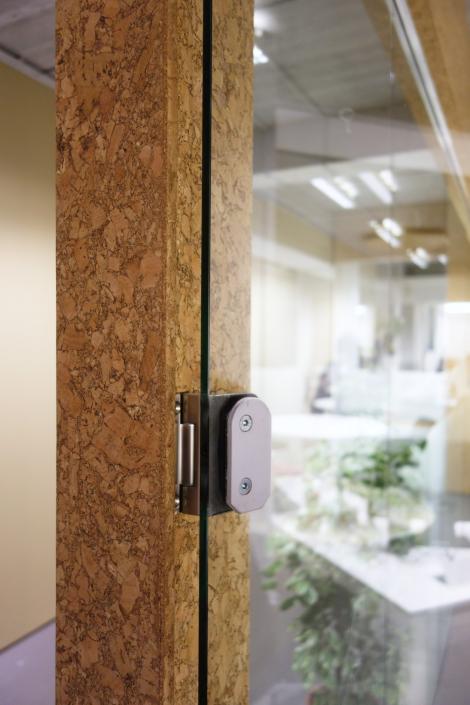 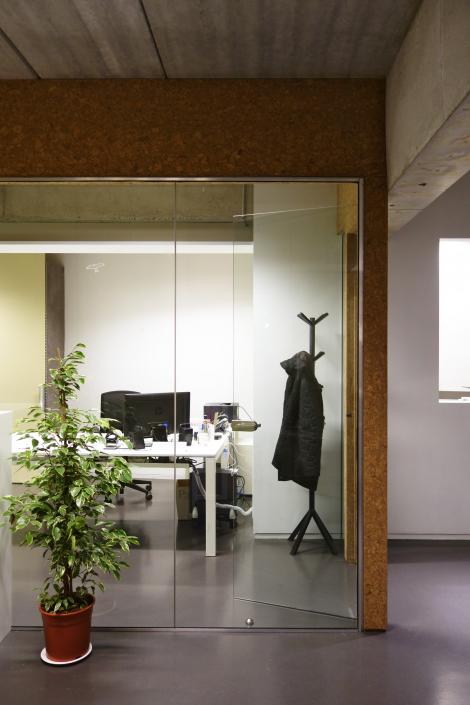 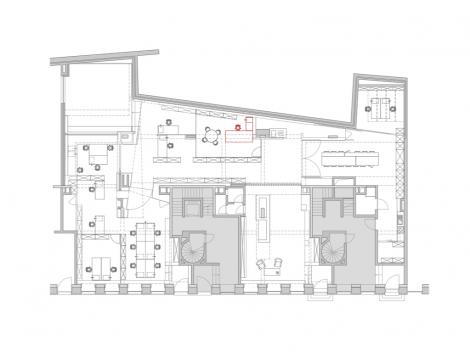